During the week beginning October 21, the department hosted Arkadiusz Klucznik from Poland, a master of theatrical masks and puppetry. Over the course of his stay, Mr. Klucznik instructed second-year theatre students in the art of ancient Greek theatre masks and performance.

This was followed by a trip over the last weekend in October to visit ancient sites in the İzmir area. The trip was led by department instructor Hande Vural Johnson, who teaches the THEA227 History of Theater I: From Origins to Renaissance course, and included both second- and third-year students. During the visit, the students had the opportunity to immerse themselves in ancient Greek, Hellenistic and Roman architecture and culture.

The workshops ended with two performances of Sophocles’ “Antigone” by students, one at the Temple of Apollo in Didim and one on the following day at the theatre of Miletus. 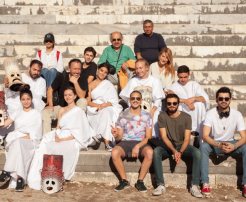 New Theatrical Venture to Premiere a New Play This Evening