During the workshop, Mr. Savelli assisted second-year Performing Arts students in creating a production titled “Don Giovanni in the Palace.” Directed by Mr. Savelli and his assistant Fabio Magnani, theatre students performed the scene in the Bilkent Theater Hall on December 7.

Commedia dell’arte, which emerged in northern Italy in the 15th century, is characterized by improvised dialogue and a cast of stock characters. Mr. Savelli’s approach helped second-year students perform an improvisational story they devised while learning this traditional theatrical form. 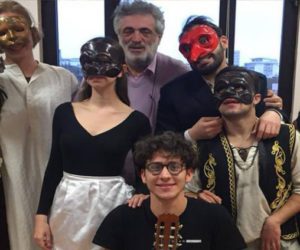 Junky is at Bilkent Theatre on November 2!

An Actor’s Nightmare is at Bilkent Theatre on December 2!