Skip to content
We investigate the neural and computational mechanisms that underlie visual perception and cognition in humans. More specifically, we are interested in visual processing of biological motion and actions of other individuals including humans and robots. To address our scientific questions, we take a multimodal, computational, interdisciplinary, and translational approach.

VISUAL PERCEPTION AND COGNITION OF BIOLOGICAL MOTION AND ACTIONS 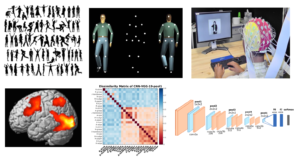 Since no neuroscientific method to date is perfect to fully understand the human brain, we use a wide variety of non-invasive neuroimaging techniques that have excellent spatial and/or temporal resolution. These include fMRI and EEG to address specific questions related to where, when, and how high-level, socially important stimuli such as biological motion and actions are processed in the human brain. In order to infer the computational and neural mechanisms of actions from the rich neuroimaging data, we utilize a wide variety of state-of-the-art analytical techniques including machine learning, computer vision, and effective connectivity modeling in addition to thoughtful experimental design. 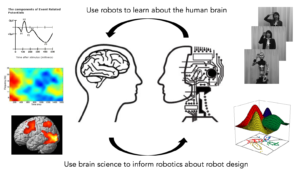 Our basic neuroscience research on perception of other individuals has also implications in more applied fields such as human-robot interaction since we study perception of not only human actions but also robot actions that deviate from human actions in a number of ways. Humanoid robots have become participants in our lives in important areas such as education and healthcare, and it has become essential to understand how they should be designed so that humans can accept them as social partners. Our applied research in human-robot interaction has allowed us to investigate the (cognitive) design principles that are important for successful interaction of humans with humanoid robots and guide the development of robotic partners using established methods and findings in cognitive neuroscience.